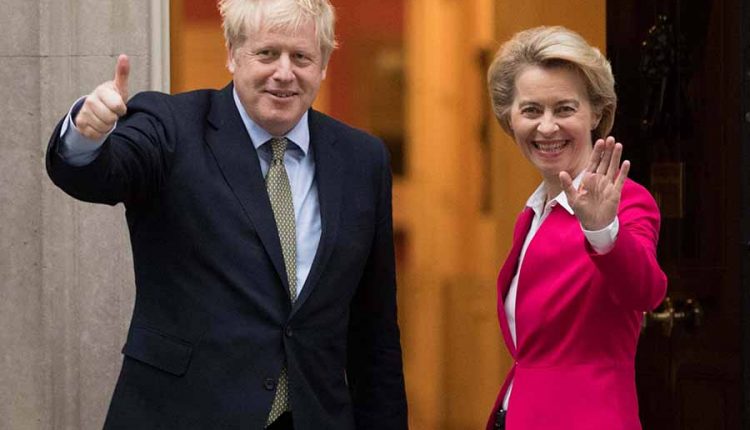 There has been no advancement in the discussions between Boris Johnson and Ursula von der Leyen. A decision on a trade agreement should now be made by Sunday.
In the negotiations for a trade agreement, the European Union and Great Britain give each other a final deadline of Sunday evening. A three-hour conversation between Prime Minister Boris Johnson and EU Commission President Ursula von der Leyen in Brussels did not bring about a breakthrough. Instead, the two sides continued to notice significant differences. Nevertheless, the negotiating teams should get back together immediately and try to resolve the sticking points within four days.

British government circles said it was still unclear whether an agreement would be reached. Prime Minister Johnson does not want to leave any stone unturned to test ways to a possible deal. “We had a vivacious and fascinating conversation on the situation with the open inquiries,” said von der Leyen. “We understand each other’s positions. They are still far apart.”

Johnson and von der Leyen had agreed to have a dinner in Brussels to discuss and, if possible, resolve the remaining points of contention in the negotiations on a trade agreement for the time after the end of the Brexit transition phase. These are fishing, fair competition and the question of the enforceability of the agreements.

Johnson said before meeting von der Leyen in the UK House of Commons that a good deal was still possible. But the EU’s demand that Britain continues to adhere to its standards or expect countermeasures are “conditions that no prime minister of this country should accept”. Chancellor Angela Merkel, on the other hand, stressed that the EU would not compromise on its core principles. If the British side made conditions that the EU could not accept, a path without an agreement would be taken.

‘US Ministry of Finance hacked by Russian state hackers’